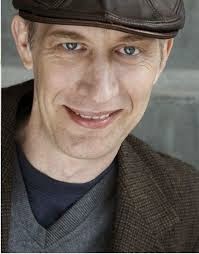 Atlanta actor Troy Halverson returns to the 2nd season of Horror Hotel in episode "Coma Girl". He appeared in the 1st season as the secret alien in episode "Invader". It's always a stitch to have Troy on set with his natural comedic personality and also a pleasure to welcome his most excellent and diverse acting skills to the project. Troy is well known in the acting circle of Atlanta having worked on literally dozens of projects from feature films to improvisational comedy acts. He does seem to excell at the creepy and macabre type characters. Thus said, we thought he would be perfect for Bob Bates, the delusional maintenance man who falls in love with a comatose patient in episode "Coma Girl".  We are delighted to share some insights into this multi-talented actor with you who despite the underworld characters he can play, is really an extremely jolly guy with a wild sense of humor.

You are a very familiar face in the independent filmmaking circle in Atlanta with dozens of film credits from features, to short films to web series, but your website states you're at heart, an improvisational comedian with hundreds of live comedy shows under your belt. That is certainly evident on the set of Horror Hotel where you can always come back with a spontaneous, funny response that keeps us laughing. Do you have any particular comedian(s) that you draw inspiration from?


I still am impressed watching performances by Jonathan Winters, Carol Burnet, and Tim Conway.  A lot of the great comedians cut their chops doing live shows, where if something didn’t go to plan, they had to just go with the situation.  I love seeing performers who make the mad-cap connections on the spot, like what Robin William excels at; I love being in the flow of comedy like that. At the other extreme, I adore very thoughtful comedy, like George Carlin or Louis CK.  I also love the acerbic one-liners of H. L. Menkin and Dorothy Parker. They weren’t comedians, per se, but they sure knew how to set up a punch line. 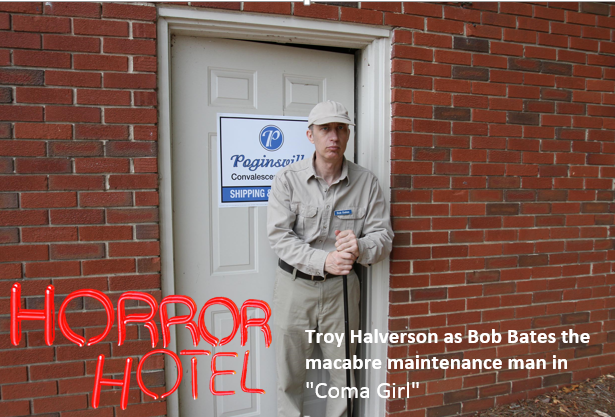 Do you ever have planned, rehearsed comedy acts?

Yes, but it’s been a while. For years I performed at Relapse Theatre where we did occasional sketch comedy. For a while we did a weekly show we called “Stop Comedy” that included about 50% new sketches each week: fully scripted, some props, on a blank stage, cast with a mix of improv and theatre actors.  I also did a few installments of a monthly show called “Living Novel.” Big ensemble, some set pieces and costuming effort, but the dialog was only loosely written – little more than an outline for an hour-long performance.  You can still get a taste of that format, including some of the “Living Novel” performers, at “Post-Modern Collapse” shows around town. 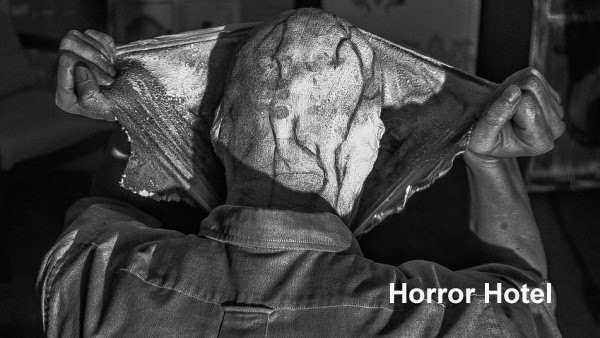 I understand you have even improvised some commercial work. How in the world do you do that?

I’ve done it two ways.  First, ensemble improvisation as a tool to brainstorm marketing concepts. The Blank Stage Theatre “Improvastorm” program brought together a client’s marketing team and a handful of improvisers to quickly concept many approaches and themes.  Second, a single performer can improvise within the constraints of a given theme.  In the case of a MARTA campaign, over 70 actors were filmed improvising one-minute scenes around the selected theme (kinda like Zaxby’s commercials). Personally, I think I did three takes on three characters. The client then selected a handful of the best spots for the campaign.

I still find it funny that – even though everything I said was at the top of my head – my pay for that job included a premium for “writer.” I was just talking in character. 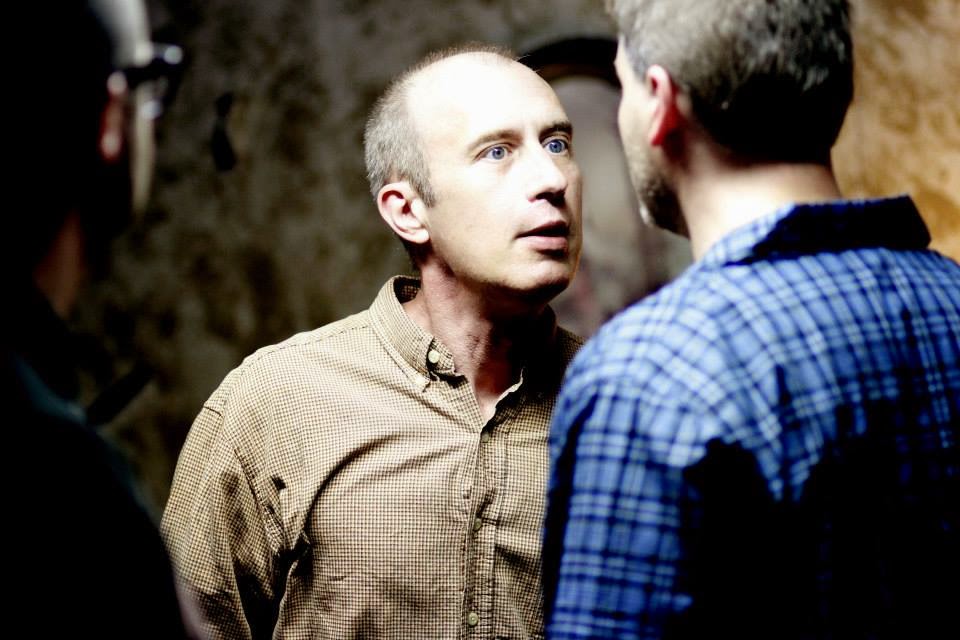 You are often cast in heavy roles: sociopaths, psychotics and just plain criminals, which, of course, makes you perfect for the Horror Hotel. What has been some of your favorite characters to date in these types of character roles?

Hah, yeah, a lot of bad guys!  I’ve played a director who murders everyone who auditions, a kidnapper who forces parents into sacrificial trades, and paramilitary Irish terrorist. I really liked playing an evil scientist in “Human Supply” because the character combined both Frankenstein and his monster…and because the DP, Sunny Lee, did a sweet job on the camera and lighting. I also like a small part I had in “Blackhats” where I played a suicidal hacker with a hand grenade.  I got to go nuts until the hero (a cop played by Errol Sadler) talks me down. I’m looking for that feature to get distribution this year. 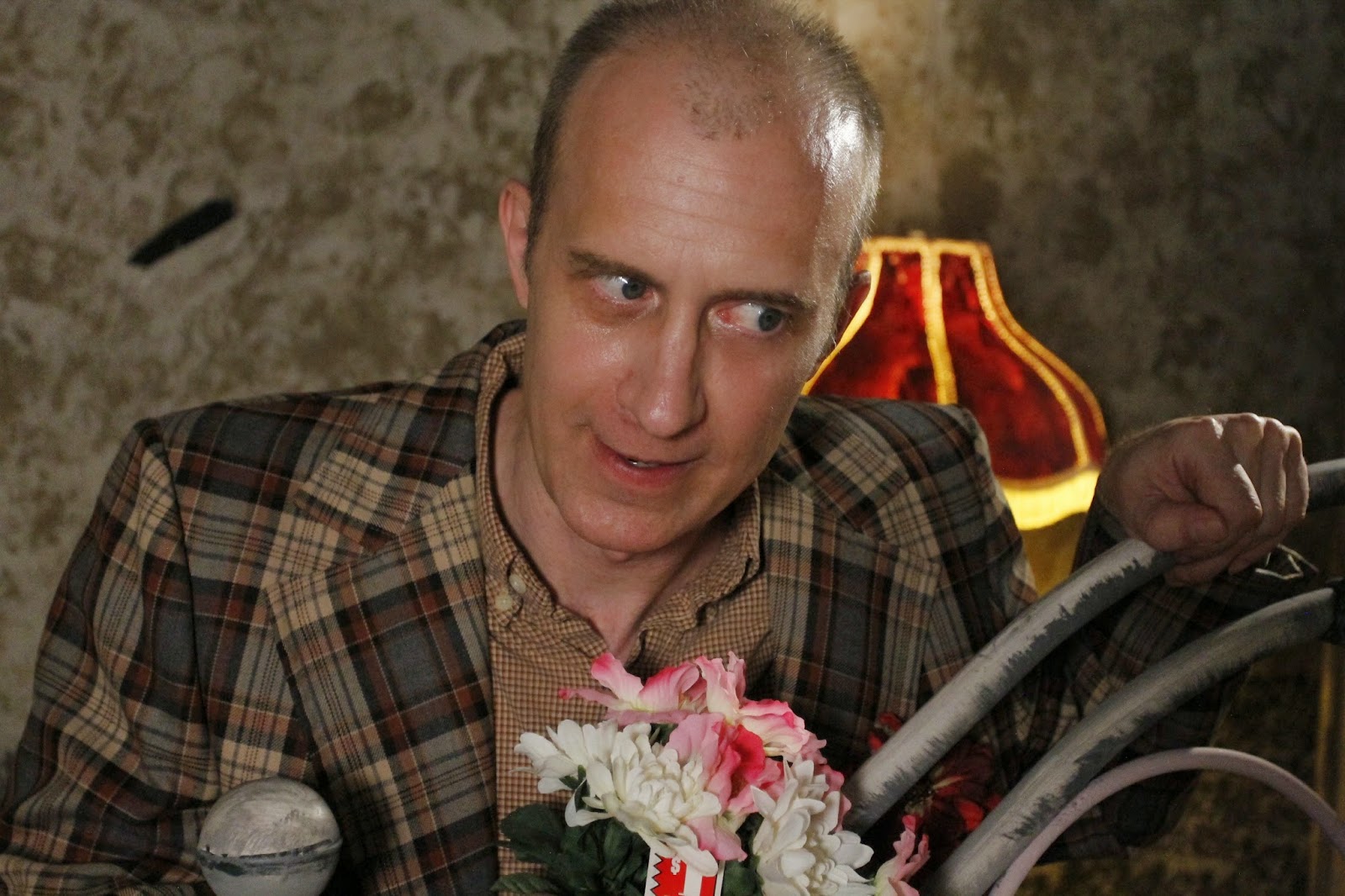 Something I did not know is that you have also directed a 3-person dark play. Can you tell us about that and would you like to direct more?

Yeah.  “The Widow’s Blind Date,” by Israel Horovitz, is about a woman coming back to confront the guys who raped her in high school.  I really enjoyed working on character development on that one. I also liked having only a single-room set to design and build.  Key learning was to edit ruthlessly; I should have cut 10-15 pages from script for better pacing.  Anyway, I really enjoy directing, but I find acting is a lot easier job.

This will be your second appearance in a Horror Hotel episode with a different character. First was the fantastic alien you portrayed in episode "Invader" for 1st season. This time, as the delusional maintenance man Bob, who falls in love with a comatose patient in episode "Coma Girl" for the 2nd season.  Your audition for the part pretty much blew us away. Can you explain the type of character you are portraying as "Bob"?

Poor Bob. He thinks he has mind-to-mind conversation with a completely non-responsive patient.  The sides reminded me of some moments in Sling Blade and in One Flew Over the Cuckoo's Nest, so I was trying to channel a little bit of Karl Childers (Billy Bob Thornton) and a little Chief Bromden (Will Sampson). Oh, and maybe a hint of Argus Filch from Harry Potter! 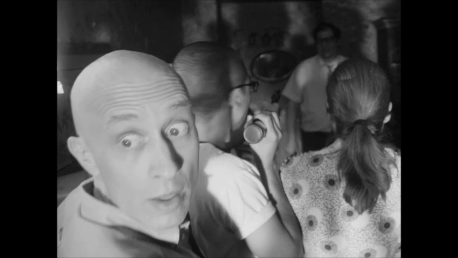 How long have you been on the acting scene in Atlanta and how do you view the quality of the local projects being produced here?

I’ve been performing in ultra-low budget SAG and indie projects for 5 years now and the tricky thing is that production quality is uneven. All the parts need to be there for the whole to work –  if something is weak with acting, or screenplay, camera, sound, location, whatever, it can ruin the film.  It’s especially tough when working with an all-green crew, or no one has worked together before, or both. Sometimes the team just doesn’t gel and the end film just goes on a shelf.

Ah, but when everything comes together right, it’s like the planets aligned; those projects are a blast and you get a gem of film. 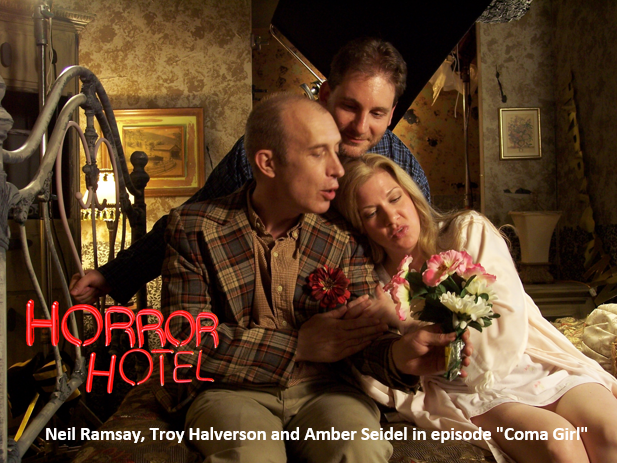 You told me you once went to Dragon Con and spent the entire time down in the basement viewing the films. Was that true?

Yes, last year, my first Dragon Con. After one grand tour of the halls – in three hotel! – I hunkered down in the cinema. I only left to get more food or beer!  To their credit, the Con organizers pulled in a lot of different genres…, a lot of stuff I otherwise never see, plus I ended up talking to a lot of film makers.  Most of the local productions featured Q&A with at least one member of the cast or crews for Q&A after each viewing. 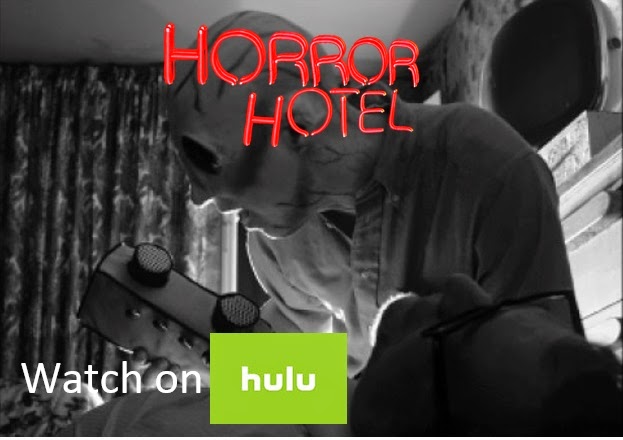 What type of films does Troy Halverson most enjoy watching strictly for entertainment?

I like the psycho mind-benders – “Memento”, “Eternal Sunshine,” “Inception” – watching characters struggle with a twisting reality or identity crisis – “Fight Club,” “Lathe of Heaven”.  Science-fiction for those “what is human?” explorations: I love Sam Rockwell in “Moon” and the whole Terminator and Matrix franchises.  I especially like stories told non-linearly – “Jacob’s Ladder,” “Primer” –  time-travel is a great trope for that.

What are some of your most recent film projects?

The most recent feature was “Morningside Monster” which started hitting festivals last fall. It’s a crime drama with Robert Pralgo and Nick Brandon as leads. What I loved was that I got to be in some serious special effects,  getting a full torso cast from hip bone to collar bone, for an evisceration scene. Very messy!  Another crime drama I just started working on is “Mr. Lockjaw.” Screenplay by Justin Craig, it’s a series pilot based on a short I was in last year, directed by Byron Erwin. I get to play a split-personality: shy ventriloquist and sadistic dummy who works as an interrogator for the mob. We got some great local talent lined up for that. 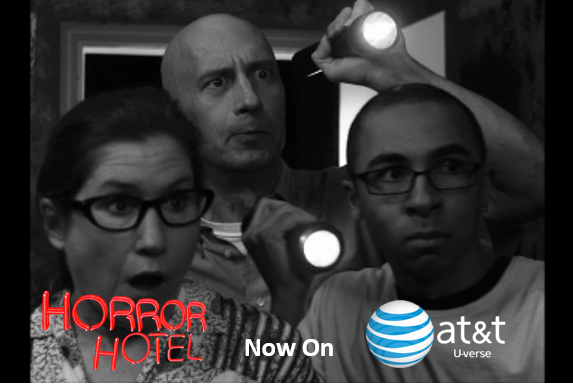 Do you find any difference between filming a web series and filming a feature film, aside from the shortened length?

It’s a lot easier to keep the whole story arc in my head so shooting scenes out of sequence is not a problem.  On longer stories, longer schedules, there’s a burden of re-discovering where the characters is on a given shoot day.  That sort of extra work, extra complexity, kicks in on the production side too, like super-complicated schedules. I think it much more manageable to shoot six 15-minute episodes than one 90-minute feature.


What do you look for most when choosing a project to be a part of?

Most? I have to like the story, the concept of the film.  Second-most would be the team, who is involved. I’ll do an under-five or extra role just to work with someone whose work I admire. 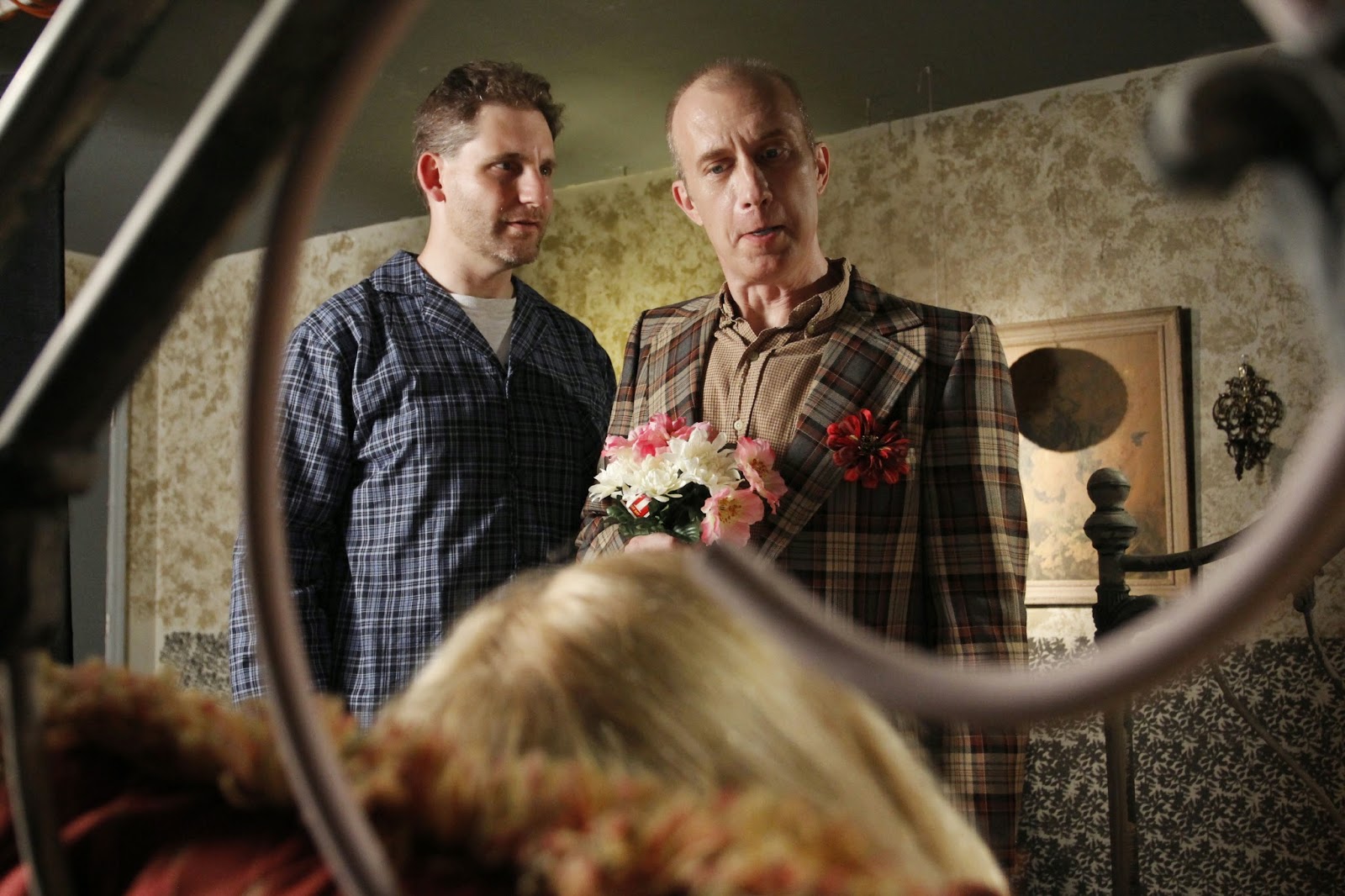 Is there any particular type of actor training that you feel has benefited you the most?

I did years of improv comedy before doing any film.  That experience in spontaneity makes auditioning a breeze. A lot of improv scenes feature getting to the emotional core of a two-person scene.  Getting experience with a range of characters, situations, and roles gave me a huge acting vocabulary.

And lastly, what has been your impression of working on the set of Horror Hotel the web series?

It such a pleasure to see a production run on schedule!  It’s so much easier to turn in a good performance when you’re not struggling through some 14-hour shoot  that feels more like a death march,  or when you discover your call-time was a half-day too early.  In contrast, Horror Hotel makes a realistic schedule… and then follows it. Love it.

Thanks Troy! There is certainly no lack of love for you here at Horror Hotel!! 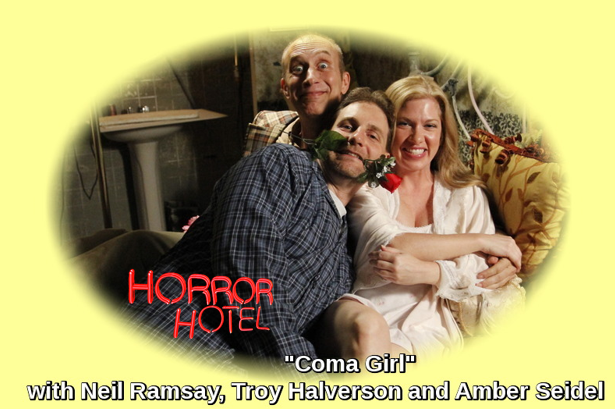